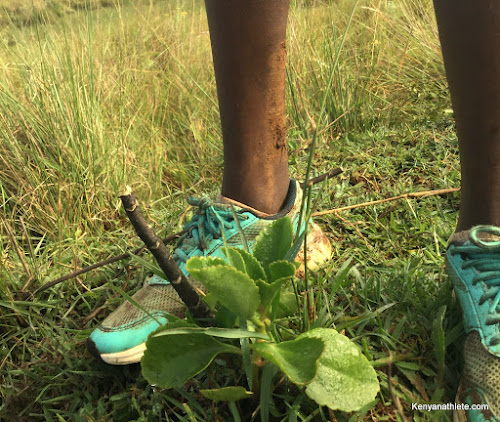 Injuries happen in many ways. Most of the time, it starts out as something that one may feel like a slight discomfort that would simply go away on its own. Sometimes, it happens abruptly in the middle of their run and forces them to stop and find other means to reach your house.

Looking back at the time that I was a small kid in primary school, I think I now finally figured out why I would run to school daily for over eight years and cannot remember any day I ever got injured because of these runs.

There was a river I would cross every morning on my way to school. It didn’t have a bridge and I would wade through the icy cold water briefly stopping in the middle to bath my legs and face before proceeding to school.

Anyway, below are some of the common ways in which Kenyan runners use to prevent and treat their injuries.

Applying some heat to an injured part of the body enables more blood circulation in that area soothes the pain and speeds up the healing process.

The most common form of heat treatment among Kenyan runners is mostly the moist heat application where some leaves of special plants, and even cabbages, are heated over an open fire and applied gently on the injured part of the leg. Besides retaining the right amount of heat during the treatment, most of the leaves used by the Kenyan runners often have some additional healing properties in them as well.

Heat therapy is probably the most common form of injury treatment among Kenyan runners.

Cold therapy works by reducing swelling and blood flow to the affected area, hence reducing the pain and inflammation.

Often, one would find some Kenyan runners leaving some water outside in a drum overnight so that they would immerse themselves in it the following morning while it would still be cold. In some of the camps that lie close to cold streams, some runners would go to these streams and immerse their legs in the cold water for some time whenever they felt some discomfort in their legs.

With the latest advancements in the way of life here, some runners these days keep ice-cubes in their fridges in order to apply them on their injured legs.

A wrong application of cold therapy may cause nerve, tissue, and skin damage.

Most Kenyan runners believe that if one gets injured and stops their training completely as they wait for the injury to heal, then the injury will resume at exactly the same point it was once they resume training again. This can be true in two ways. One is that the runner will have gained more weight when they return to training and this will increase the chances of getting injured again. Two is that remaining active speeds up the process of healing.

To help remain active and allow the injury to heal, runners often resort to slow jogging on very soft ground until the injury heals completely.

Massage is effective in relaxing the muscles, allowing more blood flow and nutrients to the tissues that need repair after hard training.

Kenyan runners often do weekly massages. There is no worry about the expenses here since the runners massage each other for free. There is an exception though when there is a serious injury that needs an expert physiotherapist to deal with. (adsbygoogle = window.adsbygoogle || []).push({});

To complement other ways of treating injuries, sometimes the runners would buy some sprays and ointments from the chemist to relieve the pain.

NOTE: You can enroll yourself in our Kenyan Online Coaching Services by sending us a message through this email