The running boom in Kenya caused by COVID 19 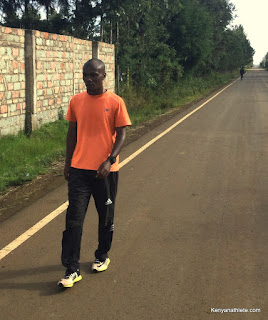 The fans that love running will still follow runners wherever they are in whatever means they can get.

Some few weeks ago, while doing a Fartlek Run with my wife, a station wagon trailed us for almost 2km. As we slowed down before the next hard run, we heard a lot of clapping and cheering as the occupants of the car praised our run.

“Imagine you were maintaining a pace of 20km per hour!” The driver of the car shouted amidst the cheering.

(adsbygoogle = window.adsbygoogle || []).push({}); Of late, there has been a surge of interest in running with the number of recreational runners beginning to out-number the professional runners on the training routes around here. The occupants of the car are part of the recreational runners that we have often been seeing around. They usually drive in a group of about five runners and park their car some kilometers further away from town, do their run and drive back to where they came from.
Perhaps by relating their experience in running and seeing the difference that years of persistent training could make to a runner, they could easily appreciate the effort that it takes to maintain a certain speed while running.

It is not very clear whether it is the slowing down of other activities that give plenty of time for people to exercise, or the desire to boost their immune systems by exercising that is putting the populations on the roads. But, the one thing is clear is that more people are taking up running.

The hardest stage in becoming a runner is the initial stages. It gets easier when one keeps running regularly after that. For the many that are beginning to run recreationally right now, it will be easier for them to keep running even after the coronavirus pandemic is over.

There has usually been a challenge in setting up sports stores in Kenya because most of the runners in the country have always been the professional ones that would be issued with training shoes and apparel directly from their sponsors. With the new running boom in the country, it is now slowly becoming possible for people to set up some running shoe stores and get customers. The stores could become the potential sponsors for some runners and smaller sporting events in the country.

It will be interesting to see how the current running boom will affect the sport of running once everything returns to normal again.