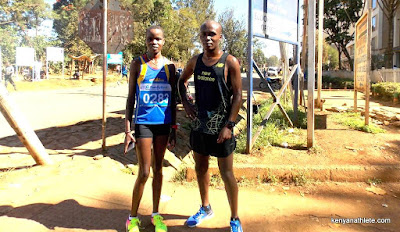 As I waited for my wife at the end of the finish chute where the officials had pushed me to, so that I would not cause more jam at the finish line, I had mixed feelings. I was almost certain that my wife would be furious and was definitely going to slap me or yell at me once she crossed the finish line since I had not believed in her when she had told me she was going to finish the marathon.  And so, as I stood there, I saw too members of the medical staff carrying her towards the first aid tent. She looked so weak and I thought it was safe for me to approach her. I approached them and patted her on the shoulder, asked how she felt and whether she was able to finish the race. She didn’t reply. Instead, she grabbed and held me tightly as she cried on my shoulder. The medical staff helped me take her to the tent where they placed her on the table, put some ice on her paining legs and did some more first aid on her before I led her away.

About one and half years ago, my wife told me that she was interested in running as a hobby. This was great news to me. It meant that she would now at least understand everything about running and more importantly, why I would “waste my time” every day going for the runs. However, it was not possible for me to take her for my usual morning runs and I would go for my runs in the morning then take her later for about 30 minutes of jogging and walking. Her fastest pace was about 11 minutes per kilometer. But within a few months, she was able to run up to 14 – 15 kilometers nonstop and slowly started to incorporate speed and hill workouts. In her first race, which was 10km she finished it in 40 minutes. In no time at all, she was able to finish 6th at the central rift championships in the 5000m event,  run 17:30 to finish 11th at the Ziwa farmers 5km, then 37 minutes to finish 15th at the Rift Valley marathon, etc. This gave her a lot of motivation coming to the Eldoret city marathon with only one aim; “I want to know if it is possible for me to finish a marathon,” she had told me when the marathon was announced sometime last month, offering the perfect opportunity for her to try the distance. I was against the idea since I knew how brutal the marathon was, and especially to someone who had just started running. But, they say that When a child cries for a razor blade, give it to them and when they cut themselves they will understand that it is not good for them to play with it.
The day of the marathon finally arrived and we were already awake by 5 in the morning. It had been announced that runners should find their own means to get to the starting line by 6, which was about 22 kilometers away from Eldoret town and we first had to reach the town before connecting to other public service vehicles to take us to the starting point. Fortunately, some schools had volunteered to provide some buses to ferry the athletes for free and we got lucky to get in the Moi Girls bus to head to the start line….HERE IS THE CONTINUATION OF THE STORY