My first ever 42km experience at the Nairobi Marathon in 2013 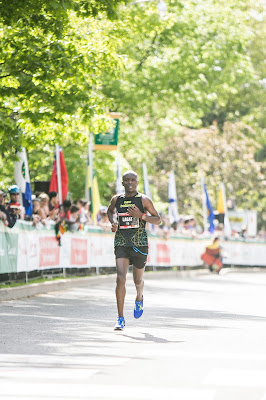 With ten minutes to 7am, the 42km wheelchair race began while we (42km runners) were asked to approach the start line slowly. The event was being aired live in a number of TV stations and knowing that it was close to the start of the 42km event, some journalists in a helicopter seeking to take an aerial view of the start of the race hovered so close overhead and we could hardly hear the announcer counting down the remaining seconds. With a white scarf, some officials tried to wave to the pilot to move away, but to no avail.

I saw the starter aim his gun upwards...almost towards the helicopter! I knew the time had come. I wanted to make sure my watch will start well, so I started it some seconds before the gun went off. The gun went off and we dashed forward to avoid a stampede.
For the first two kilometers, as usual, the pace was very high as athletes struggled to take vantage positions in the leading pack. The pace then slowed down a bit as we approached 5km but finding the crowd at the lead too large and inconvenient to be in it while tackling corners and picking water at the aid stations, I felt comfortable running some few meters behind them. I found two other friends from Eldoret who liked my pace and we decided to do it together, crossing the 10km mark in 31:50. If only we could maintain, ours was the best pace to take the marathon. Unfortunately, we lost each other before 20km.
The 11th edition of the Stanchart Nairobo Marathon in 2013 started outside the Nyayo Stadium with the first half of the race covering much of the city streets while the remaining half took us (the athletes) past the stadium to run two loops on the Mombasa highway before returning into the stadium to cross the finish line on the 400m track. Being the biggest marathon event in Kenya, everything came to a standstill for a few hours of the morning in the city as over 21,000 participants comprising of men, women and children from all walks of life took to the streets to support the 'seeing is believing' initiative that works to eradicate avoidable blindness in children under the age of 15 years.

What I have come to like about the Nairobi marathon after participating in it since 2007 is the measures they take to ensure that your bags are save as you go out to run. Even if you left your phone on and came back to find seven missed calls like I did this weekend, no one would pick it from your bag. It is always an automatic routine for every athlete to change, leave his bag, look for the bathrooms and head to do a little warm up near the start line.
As expected after a recent terror attack at a mall in the city, the security to the venue was tight. My case would even be better than that of other participants because the only item I had in my bag was a 25ml Vaseline lotion. Some athletes who had sports drinks were asked to drink them and throw the cans before passing the security check. I thought the screening was over after the initial check point, only to be asked to enter another queue after taking a few meters ahead. I was searched again by security personnel from one firm, then immediately by another one again from a different firm, even after watching me being searched by the first one! Well, you can now choose a word to use for yourself regarding that kind of security. It may have been a bit irritating if one was a little late, but it was reassuring to know that more than enough measures had been taken to ensure our lives were safe. There were so many security officials everywhere to an extent that I can't say for sure who in number between them and the participants were more!
Unlike in the previous years, the new course had hilly sections that took toll on many athletes. And to make it worse, there were no isotonic drinks served. It was pure water all the way to 42km. Many athletes gave up after around 30km when they lost hope of taking another 10km loop before returning to the stadium. One lady who took one loop of the Mombasa road brought some confusion when she crossed the finish line ahead of the real winner, but all was settled when the other women finished the race and gave their version of the story.
After 30km, there was no more pack in the lead as each athlete seemed to be running his own race from that point. Kenneth Mungara won the race in 2:11.40 followed by Hosea Korir in 2:12.05 and Barnabas Kipyego in 2:14.07. The women's race was won by Winfred Kwamboka followed by Florence Chepsoi and Agnes Cheserek in second and third positions.
While I am always grateful for all the sponsors and volunteers who make these races successful for athletes, I was particularly touched by the voluntary work done here by a massage department of the Machakos Technical Institute for the Blind. There were only five visually impaired SHIATSU therapists who were able to relief many athletes who needed to relax their muscles after the race. I remember hardly being able to move my legs after the race, but feeling so relieved after their therapy that I even felt ready to do another marathon the following day.