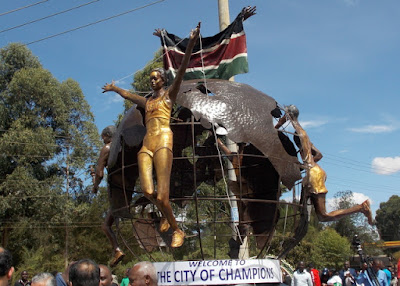 Two historical days unfolded consecutively in Eldoret town, the city of Champions. On the 22nd of February 2019, statues of Kenyan athletes were unveiled along the Nairobi-Eldoret higway at a junction that appears to be the gate to Eldoret town. This is probably the first time that such statues to recognize athletes that have given so much glory to the Kenyan nation are being set up anywhere in the country.
(adsbygoogle = window.adsbygoogle || []).push({});
On the 23rd would be the first time that the national cross country championships, referred by some speakers during the launch of the statues as the “semi-finals of the world cross country championships,” will also be done here.
The Mediheal Group of Hospitals was instrumental in the construction of the statues as part of their corporate responsibility to the community. The head of the hospitals, Hon. Mishra Kiprop during the launch expressed his recognition of the world beating Kenyan athletes and even urged the Athletics Kenya body to make available the register of all the Kenyan athletes so that every athlete will be entitled to free medical check-up in any of their hospitals and a 50% off on any treatment they will undergo in case they are diagnosed with any illness.

India’s high commissioner used the opportunity to speak out on an exchange program by the Indian government to have a number of Kenyan athletes be sponsored to go out and train in India so that they can influence the upcoming Indian runners to train like them. At the same time, the Indian government will be sending a number of Indian runners to come out and train here in Kenya as well so that they can copy the culture of the Kenyan runners and take it with them to India.
Most of the athletes present during this function were those who will be running at the national cross country championships the following day. This was part of the day’s events that included an anti-doping seminar, technical meetings, collection of competition materials and a tour of the course to be used for the national championships.