James Willis just ran 72km to mark his 72nd birthday and here is my interview with him.

February 18, 2021
Share this
It is now the second month of my working with James Willis, coaching him under my online coaching programs

As a coach, one would often expect their runners to do slightly better than what they are doing at the moment. Rarely would they find them surpassing their expectations. But, here is one runner who definitely surpasses everyone’s expectations and who should be a great inspiration to many.
James Willis just ran 72 km as he turned 72 years old today (21st January 2021). Most runners would struggle to run 72km in a whole week. To run 72 km in a single day, for a 72-year-old, is just mind-boggling! And, as if that is not enough, he is preparing to run a 168km race in April!
(adsbygoogle = window.adsbygoogle || []).push({});
Here is an interview I had with Willis, who is from London, UK, but now lives in Banting, Malaysia; a few days before his birthday run:

1. What inspires you to keep running at your age?

My inspiration to keep running at my age is purely so that I can and still be competitive to some degree. I love running and perhaps one day in the future, when I am no longer competitive, I will just run for pleasure only.

2. How does your life feel when you are running compared to when you had stopped running at some point?

I came to running quite late. I was an all-round sports child, but Rugby was my first love and the only running I did was while training for other sports.

It is quite a story how I first became a runner. Back in the day, it was compulsory for UK secondary schools [11 to 17 years] to hold a cross-country run each year as part of the physical education program.

Well, not being a runner during the first two years I never completed the three-mile event, I and many others would run to a thicket on the course, perhaps half a mile, and hide in there until many of the runners had passed us on their way back and then slip into the bunch for the return journey. Of course, we thought we were so clever.

In year three, now thirteen years old and an accomplished rugby player, things changed.
Crossing the finish line in my usual manner my rugby coach, Mr. Pallister, pulled me to one side and said “Willis you are a waste of space and a discredit to the school and yourself. Do you think we don’t know what you boys are up to? We expect it from many of the lazy so and so’s but not from the likes you”

I took it to heart and decided to show him who was a lazy so and so.

The next year, several months before the cross-country run I started to train myself, I was going to show him what I was made of.

On race day I set off like a mad thing, probably not how I should have but I had no race experience. To cut things short I not only ran well, I actually came home in first place in a very mixed bag of around one-thousand boys.

But that was not good enough, I made a beeline for Mr. Pallister, I needed to make sure he knew exactly what I had achieved. Just as I got close to him, in a voice loud enough to ensure I heard him, he turned to another teacher and said “I told you he had it in him, he just needed a kick in the pants” he then turned to me and said “Willis, my office first thing in the morning, I will explain what your duties are now that you are the captain of the cross-country team”

And that, as they say, was the beginning of something great.

I continued cross-country running, I was not fast enough for track running as the longest distance run then for my age group was one mile, until I went to university. I was not intelligent enough to learn and spend the many hours of training that I needed to remain competitive.

I continued to play rugby, cricket, and a little football for many years but I never got back into competitive running, I just run for fitness and pleasure never more than ten miles and usually much less.

I cannot say I missed running because my life was full in other ways.

3. What are some of the greatest moments in your running career, so far?

Running as a youngster gave me real pleasure and pride. I was never the best, but I was very competitive and had my share of wins through the years. My greatest moments then I suppose was representing my district and London at a school-boy level. 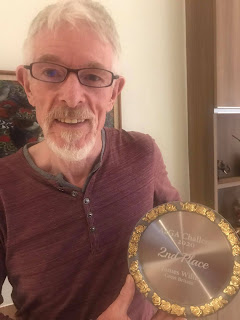 Since returning to competitive running at the grand old age of sixty-four I have two standout achievements, finishing second in my age group (twice) in the Xterra World Trail Running Championships.

But, my proudest moment was commemorating my father by running ninety-nine kilometres during lockdown on a seventy metre course around my home. I ran it on the day he would have been one-hundred years old had he not been taken from us just five weeks earlier.

To date, my furthest distance run was a DNF, just a little short of one-hundred-and-forty kilometres in the Delirious WEST 350k trail race. I had suffered really badly on a seven kilometre section through sand dunes and quit at the next checkpoint, a decision I very much regretted after a few hours’ sleep. However, I tried to redeem myself and paced a friend home over the last fifty or so kilometres.
(adsbygoogle = window.adsbygoogle || []).push({});
As for what do I think I can run at my age, let me just say I have already committed myself to run the Delirious WEST in 2022.

5. You have a 168km race planned for April, tell us a little bit about it and what you hope to accomplish there.

The Route 68 100-mile race in April is one of the top road ultras here in Malaysia. For me, it is a step-up event. I ran the Route 68 100-kilometre event in 2019, finishing eighth overall and fifth in the veteran (over 40) category. I was to run the 100-mile event in 2020 but like so many others the event was struck-down by COVID-19 and postponed to this year. My aspiration is to do better than I did in the 100-kilometre event, I love showing the youngsters how it can be done.

6. Does your family and friends approve of the running activities you are engaging in at your age? Do you have any grandchildren and children taking after you?

My wife is not only my number one fan she is also my entire ‘pit-crew’. I do not know what I would do without her. She supports me in so many ways. All I need to do is choose an event I want to run, and she does the rest; she sorts accommodation and travel arrangements, ensures I have all the kit and supplies I need. Events up to two hours she will be at the start and finish, over that she will see me off at the start and be there again when I finish. For Route 68 she has volunteered to crew for me.

My two sons are amazed at what I do. My eldest son says as he is getting older, I am getting younger and he thinks we will meet in the middle. It makes me so proud that they look up to me in that way. My two grandchildren live in America but they have been to see me race in their home town. I ran a New Year doubleheader. A half marathon at six pm on New Year’s Eve and a half marathon at 6 am on New Year’s Day, they each have an age group winner’s trophy and I have the combined winner’s medal.

None of my family is in any way sporty, I have a few cousins that play golf socially and that is about it. My youngest son is a bodybuilder and my eldest son hits the gym, once a year to renew his membership I think. As for my grandchildren, one is very artistic and the other is a musician.

7. What message do you give to the younger people who are pre-occupied with sedentary lifestyles in their houses?

I cannot express enough the benefits of exercise of any kind. The great outdoors is just that great and outdoors, it has so much to offer us. A sedentary lifestyle will only ever take away what is possible, being active in any way you please will give you so much and for so much longer.