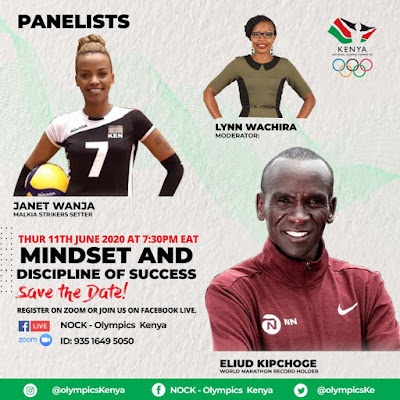 I have been following online webinars live on FaceBook that have been organized by the National Olympic committee of Kenya (NOCK) to educate athletes on different fields of their careers.

NOCK has been bringing in different experts to enlighten athletes. The first two topics have been on finance management and on building a personal image that the local brands would wish to work with. This week on 11th of June, Eliud Kipchoge, the greatest marathon runner of all time, will be one of the panelists.

One of the experts to have been invited to talk to athletes was Shaba Njagi, a financial expert. She gave valuable advice to athletes on how to secure their financial future.

She addressed the dangers of a “false well-being” that most athletes often get into when they win money from some big competitions. Such false well-being may drive the athletes to ask for some salary advance or request for loans that would put them in a circle of debts.

She also mentioned that some athletes feel that they are still too young to invest and manage their finances. According to her, the habit of saving should begin from the little you get and one should not wait till they get more to begin saving.

Other points she mentioned included the need for athletes to know what kind of assets they should begin investing in, as she took them through the different types of liquid and and fixed assets.

“A home is not an asset. I doesn’t generate any income,” she said.

Peter Mucheru, a marketing expert, took the athletes through the topic of creating a good image for themselves.

“Being a champion has a short shelf-life, but being a star has a longer shelf-life,” Mucheru said. “Most of the sponsors who want to work with athletes are interested in selling their products; they are not paying because they love the sport,” he added.

He urged athletes to be known beyond the field of sports by giving out media interviews and staying close with the media people.

Muchero urged Sports managers to work on media training for their athletes at an early age. He mentioned Social Media’s rapid change from being a distraction into being an asset and that athletes should learn to use the platform. “You don’t need a manager to post a photo,” Mucheru said.

Other ways that Mucheru mentioned in building a good image include associating with the community, supporting upcoming athletes, helping others achieve their goals, among others.

“Build an image that brands might see a value in using it to market their products,” said Mucheru. He stressed that brands should not just see an athlete in a champion, but sometime else as well like a great mother, or another personality and character.

The NOCK webinars happen every Thursday and is live on their social media handles.